Unconscious Bias at the Office – Does Your Company Have a Plan?

Recently I read an article about Fortune Magazine’s Pattie Sellers moderating a discussion with execs from Facebook, Coca-Cola and FCB Worldwide on how their companies were attacking the problem of unconscious bias. When referring to unconscious bias, Maxine Williams, global director of diversity at Facebook spoke about “a problem that, as increasing numbers of companies are realizing, prevents them from improving their workforce diversity and typically interferes with the productivity of their employees.”

When Seller asked the audience of 200 executives whether they had unconscious bias training programs within their company, only a dozen raised their hands. When asked how many would like to have a program, practically the entire room raised their hands.

Huh. If unconscious bias is as big a problem as it seems, why don’t more companies have a plan to deal with it?

So, I asked our CEO, Susan Colantuono, what she thought of unconscious bias and to provide some insight on what companies can do to remove it from their culture. To help me wrap my head around the problem, she referenced a statement made in McKinsey research on this topic as a way to understand unconscious bias. “Of all the forces that hold women back, none are as powerful as entrenched beliefs. While companies have worked hard to eliminate overt discrimination, women still face the pernicious force of mindsets that limit opportunity…”

“The challenge, Kelly,” she said, “is not simply to teach about unconscious bias. It's to help managers clearly understand how their mindsets (even those that seem to be gender-neutral) cause disparate talent actions and decisions and to get them to stop. Most general unconscious bias workshops do not do this." Watch this video to 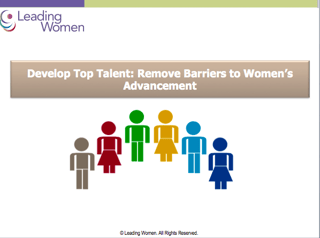 understand more about Gender Dynamics and why our unique programs are so successful for our clients. And then read our white paper from Leading Women’s research on how talent development and performance management systems may have a built in gender bias.

Both of these resources really helped me understand the problem of unconscious bias – so I thought I would share them with you! Then, contact Leading Women.
We have real solutions to minimizing the adverse impacts of unconscious bias/gender dynamics.