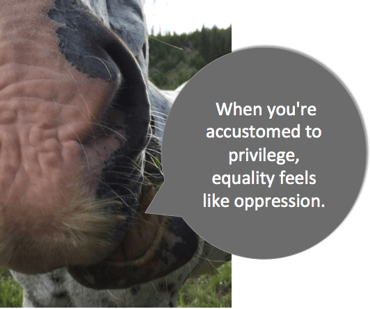 END_OF_DOCUMENT_TOKEN_TO_BE_REPLACED

As I read the key findings from LeanIn/McKinsey's latest research I notice a pattern with how they reported on gender issues. Take a look at these excerpts from the "Women face an uneven playing field" section and see if you can catch it:

END_OF_DOCUMENT_TOKEN_TO_BE_REPLACED

Take a look at the nine seconds of burbling Yellowstone “mudpot” action above. Here at Leading Women, we love this video because it’s a perfect metaphor for shaking things up. And when it comes to shaking up the mindsets of managers to take action to close the leadership gender gap, we’re even more passionate. “I have taken a lifetime to create these mindsets,” said one of our clients, a European executive at a global company, “and now you have destroyed some of them in three hours.” Ka-pow!

END_OF_DOCUMENT_TOKEN_TO_BE_REPLACED

While on Facebook the other day, I came across this post from a friend, who works in HR for a well-known US-based health insurance company, and I could not get what she wrote out of my head.
END_OF_DOCUMENT_TOKEN_TO_BE_REPLACED