At Leading Women we use the term gender dynamics to mean the impact of managers' mindsets on their talent development and talent advancement actions. For years, we've been studying 11 of these mindsets and their impacts around the globe.

We call one of them the Insider Status of Men/Outsider Status of Women, and contrary to protestations that this isn't an issue any more, we've found three recent manifestations that we'd like to share in the hopes that they will promote further discussion, analysis and action.

In Google's excellent YouTube video on diversity, Dr. Brian Welle, Director of People Analytics, cites the example of meeting rooms on the Google campus. Named after famous scientists, only one bore the name of a woman (not sure how many bore names of global and diverse scientists, but that's for another day). Google's commitment after having its awareness raised about this has been to change the naming conventions.

Similarly, a recent article about Dropbox's diversity awakening (attributed to the departure of several key women executives) mentioned the insight that it might not be very welcoming for women to have to show up for a meeting in the "Bromance Chamber."

So, what's a company to do? When it comes to the naming of meeting rooms, I was delighted when I visited the new Paris headquarters of Alcatel-Lucent to find that each floor represents one of their global regions and their meeting rooms are named after cities in those regions. I happened to be on the EMEA floor meeting in Johannesburg! 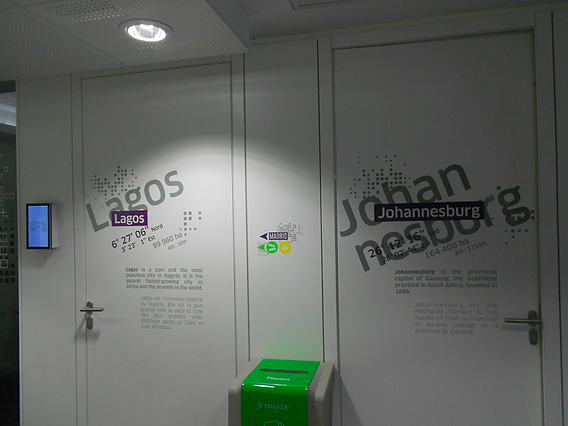 Not only is there no gender exclusivity here, but it reinforces Alcatel-Lucent's identity as a global company - one of the features cited as important when candidates are determining where to work.

The names of meeting rooms represent subtle actions that reinforce the insider status of men and the outsider status of women. But there are some that aren't so subtle. Recently in a women's focus group on barriers to advancement, the attendees cited their organization's habit of taking potential clients to strip clubs as another.

In what subtle (or not so subtle ways) might your company create an environment in which women feel like outsiders?

And what have you done or are you doing to create an environment where women feel fully included? Please let us know.

About Leading Women
Leading Women is one of the world's premier consulting firms for companies committed to achieving goals for women’s advancement. Its proprietary research is the basis for innovative solutions that deliver unique insights, actionable tools and a business focus. HR, Learning and Development, Diversity & Inclusion and IWiN* clients around the globe have deployed Leading Women's live, virtual and online solutions. For more information, visit Leading Women, call +1-401-789-0441 or email us info@LeadingWomen.biz.