Leadership Encounter of the Grizzly Kind 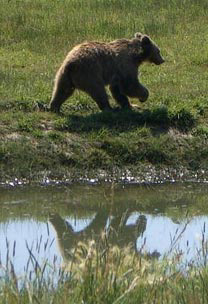 Riding toward our campsite at the head of the Gardiner River in Yellowstone National Park, Vickie points across a valley to the top of a hill. "There’s a Grizzly up there," she says.

I think, "Wow, that’s amazing!" I had never seen a Grizzly in the wild in any of my 5 trips to Montana over the past 10 years.

Then I think of a warning a friend received when riding in Alaska. "Don’t lag behind the group along the trail. A Grizzly is less likely to attack a cluster of riders than a lone rider." This is a particularly helpful thought – I’m riding in the rear of the group!

Then I remember what Mike and Erin told us last year, "If a horse dies in the back country, the outfitter notifies the Park Service and they dynamite the carcass."

"So that bears and wolves don’t develop a taste for horse meat."

Now, that’s comforting - at least the bear’s not thinking he’d like a littlehorse d’oeuvre (sic).

The next night Vickie calls us from the campfire, “Look, there’s a Grizzly in the river.” And what a beauty – a large silver-backed specimen.

Now this Grizzly – in spite of seeming totally preoccupied with fishing - is a little too close for comfort. Excitement mixes with fear in most of us. H.A. Moore (our outfitter) and Justin (my son) make sure all the food is immediately put in the panniers and hung out of reach. The rest of us grab cameras and binoculars and watch the bear amble into and out of the stream, heading in the general direction of the campsite.

Justin joins us, but H. A. sits comfortably by the fire, bear spray at the ready. As the bear crosses the river and comes closer and closer, Justin asks, "What’s the range of the bear spray?"

"Riiiight... just enough to end up with a really angry bear 20 feet away," Justin jokes.

"Oh don’t worry," H.A. replies "the mules will drive the bear off."

Hmm. Interesting. A Grizzly run off by mules? Seems unlikely, since they’re contentedly grazing. Grazing is what equines do best. If you were into corporate-speak, you could say it‘s one of their core competencies. Seems unlikely too, because, in the grand scheme of things, mules are prey. Come to think of it, equines’ other core competence is running in a straight line away from predators!

But, hey, H.A.’s the leader here. Seems he should know what he’s talking about. Time for a little trust…a little risk-taking. So we all stand near camp watching, taking photos and nervously laughing about what we’re doing. 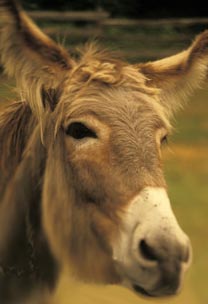 Minutes go by and the bear is getting closer and closer. He crosses to our side of the river. And still the herd quietly grazes. The mules will run off the bear? Riiiiight. Seems about as likely as snow in August.

Suddenly the lead mule catches sight or wind of the bear. The mule raises his head from the lush grass, looks attentively at the bear and takes a few steps toward it. Then, the mule stands still, ears forward – tuned into the threat in its territory. A short while later a couple of the other mules catch on to the fact that the leader isn’t grazing any more, raise their heads, see the bear, and walk calmly over to the lead mule, focused intently on the bear.

A few seconds pass…then the lead horse joins the mules. Then two more follow. And then a few more. After a couple of minutes nearly the whole herd is gathered watching the bear.

Then, to no visible signal, the herd starts walking toward the bear – they actually seem curious about that Grizzly, but the interest isn’t reciprocated. Wanting nothing to do with the equines, the Griz lumbers away, followed by the herd until he’s out of their territory.

One by one the mules and horses each drop their heads and return to grazing.

So, what makes this a leadership encounter of the Grizzly kind?

As leader for the larger unit, H. A. knew the strengths of all his team members, people and equines alike. He knew that mules are more territorial than horses and capable of marshaling the herd to run off a Grizzly bear. So while we were nervously watching, he sat relaxed, trusting them to do their job.

As followers, none of us had met H. A. before this trip. We each took a risk and put our trust in him on the basis of his competence and reputation. For two days, his behavior validated the wisdom of our trust. While we were slightly nervous about facing this Grizzly situation, none of us panicked – he had given us no reason to question his leadership.

Within the larger unit of outfitter, crew, and riders, the herd was a sub-team. Within the team it was the lead mare that took the herd to various venues for grazing. Facing this environmental threat, a more territorial mule took the lead. The mule moved forward to study the threat and took no action until the time was right.

It was soon joined by a small number (about 20%) of the rest of the herd. These like-minded "team members" weren’t coerced into a change from grazing (business as usual) to addressing the environmental threat – they went along zealously.

The 20% acted as enough of a pull to motivate change in the others. The leader didn’t have to kick, bite, herd, or otherwise command and control the "team" into action. Within a very short time the majority of the rest of the herd had stopped grazing and had joined the leader.

Once the lead mule took action, it didn’t get distracted – it walked resolutely toward the bear with the majority of the herd joining in.

The few stragglers finally gave up on grazing and linked up with the herd as it moved toward the Grizzly. The stragglers realized that their survival depended on not being left behind.

Within the human sub-team, the leader was able to give credible assurances about his sub-team’s performance. Within the equine sub-team, the inherent strengths and leadership qualities of one of the team members enabled the group to recognize a threat in its environment, stop business-as-usual, and mobilize to overcome the threat. 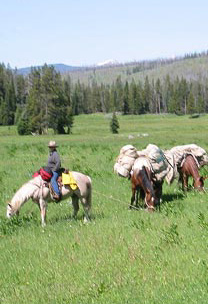 What lessons can a leader take from our encounter of a Grizzly kind?

The next afternoon a Grizzly again appeared on the other side of the river. We watched it for a while and then went about our campfire conversations. No cameras, no binoculars, no nervous conversation -- we had learned that the mules and horses would keep us safe. The leadership encounter of a Grizzly kind taught us that leadership lessons can come straight from the horse's (mule's) mouth!