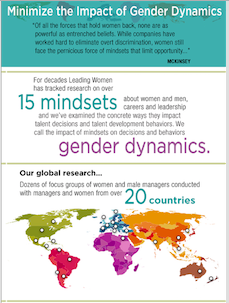 When it comes to overcoming mindsets that cause the leadership gender gap, one of the practices that we recommend is to require recruiters (internal and external) to deliver diverse slates of candidates for key positions. While companies often focus on senior positions, we recommend this practice be implemented for positions above the diverging point (the point at which the % of women begins to decline and that of men increases).

While it is intuitively logical, that this practice would contribute to more women being selected, the research of Iris Bohnet of the Kennedy School explains why. Comparing women and men in hiring pools minimizes the risk that gender dynamics (bias, assumptions, stereotypes) will result in poor hiring decisions.

As explained in the Wall Street Journal article, the study demonstrated that:

"... people who evaluated candidates singly were highly influenced by the candidates' gender. When various employees were considered for promotion at the same time, however, gender didn't affect assessments...

A possible explanation is that when there is only one candidate in front of a manager, the employer's context is often what's in his or her own mind, which may have biases. But when candidates are evaluated in pairs or small groups, employers tend to compare them to each other and can focus more on performance."

This suggests that for optimal organizational performance it is important for HR to present gender diverse slates of candidates for positions at all levels, not just for positions at the top.

Here are three tips to help your organization present and capitalize on diverse candidate slates:

Requiring a diverse slate of candidates is one of many strategies that will minimize the adverse impact of gender dynamics on women's advancement. Want to learn more?

Do you have additional tips for getting and using gender diverse slates of candidates? Let us know and we'll share them.