What's Changed in Perceptions of Women in Leadership? Not Much 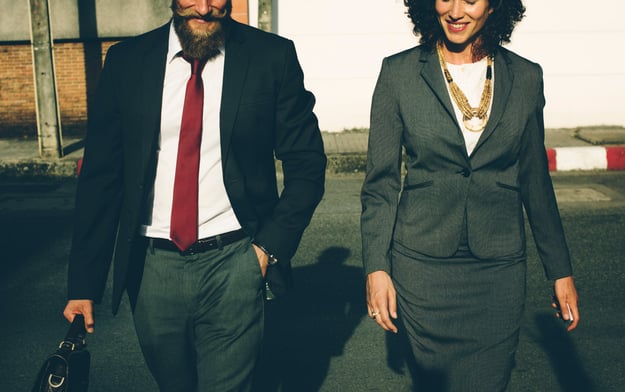 When I talk about The Missing 33%™, the first research I cite is from a BusinessWeek cover story published in 2000. In short, the findings were that women "outshine their male counterparts on almost every measure."

This led me to research what the almost was all about. After all, if we're so good, why were there so few of us at the top? The finding is what we call The Missing 33% and basically it means that women outshine men on interpersonal and team skills but men are seen by bosses as better than women at business, strategic and financial acumen.

It's inevitable that, hearing this, someone will make the point, "That was years ago. Surely things have changed."

"...at all levels, women are rated higher in fully 12 of the 16 competencies that go into outstanding leadership. And two of the traits where women outscored men to the highest degree,  were taking initiative (P) and driving for results (P - the reason this is a P and not an O is because you can do you job and hit your goals without having business, strategic or financial acumen) – two traits which have long been thought of as particularly male strengths.”

“When global management consulting firm McKinsey asked business executives around the world what they believe were the most important leadership attributes today, the top four results were:

An Apollo Group study finds that women are well poised to lead into the 21st century. Why? Because...

"Women top the charts in key skills. Women outperform men on key leadership competencies, such as

Women also score higher than men on traits that are essential in today’s collaborative work environments, such as:

Authors John Gerzema and Michael D'Antonio have written The Athena Doctrine in which they make the case that women and men who think like us will rule the future. Why? Because we have the excellent interpersonal skills and personal attributes that people want in their managers - intuitive (P), expressive (P), passionate (P), selfless (P), patient (P/E), flexible (P), etc. I came across their book because of an article on "the vision thing" by Kay Koplovitz in which she writes:

"The Harvard Business Review published an article in 2009 on this very topic called "Women and the Vision Thing," with interesting information and conclusions. Originally, their study found that women tested higher than men in many leadership categories except one: envisioning, or the ability to recognize new trends and opportunities and develop new direction for the organization. The perception of women as poor visionaries, in this study, comes from male peers. Now, the newly released and well researched "Athena Doctrine" by John Gerzema and Michael D'Antonio reported that being a visionary is a neutral trait, that it was neither a masculine or a feminine trait.

So which is it? Are women visionary or not?"

Here's the thing, John and Michael interviewed lots of people, but they didn't focus on how bosses make decisions about advancement. They don't make the distinction between traits and proven skills. Sure, women have vision. Who among us doesn't imagine ourselves 10 pounds thinner, or our kids being the next great success or our partner being more romantic?

A recent study by Mercer found that male managers are seen as having an edge in:

Women are seen as having an edge in:

"...with the exception of confidence, women generally score higher than men in all dimensions of leadership style and in most of the skills and competencies deemed necessary for senior leadership success, such as employee engagement, customer satisfaction and building talent.

Excuse us, but these talents are clustered into "engaging the greatness in others" - only 1/3 of the elements needed for senior leadership success. As a matter of fact, buried in the study they admit this as well.

"Women are rated lower in financial and strategic skills both of which are mission critical at the executive level."

Mercer's 2016 When Women Thrive study reports, "Women are perceived to have unique skills needed in today’s market, including:

And among those viewed as men's strengths? 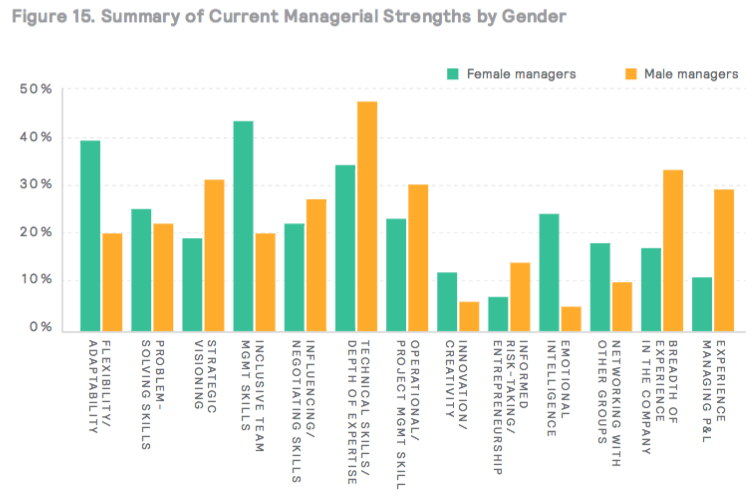 A study jointly published in November, 2016 by PR firm MWWPR and Wakefield Research reports that "When Americans were asked about the skills that are most often the yardstick for judging leadership performance and personal career success, the overwhelming majority give men the upper hand. More than three-quarters of respondents describe men as being stronger at

Crossing our desk in 2017 is this 2014 study from the Norwegian Business School whose researchers found that women outperformed men in 2 out of what are described as the 5 characteristics of leadership.

40 Years of Research Prove Women are Better Managers than Men

With a headline nearly as compelling as Businessweek's "As Leaders, Women Rule," Michael Schneider's Inc. article summarizes a Gallup report citing these strengths of women. 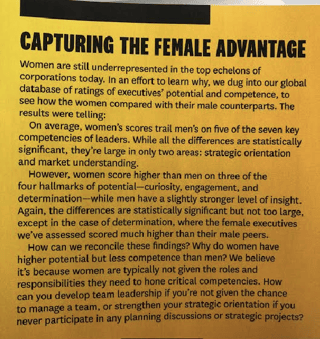 Egon Zehnder contributed piece on Leadership Development to HBR in which they report that a study shows statistically significant differences in perceived leadership skills of women and men. Women are perceived as lagging men in:

And men are perceived as lagging women in:

1. An article from MarketWatch summarized findings that women are more likely to practice five of the nine management behaviors that McKinsey* thinks are key to a company’s success. They include:

*This information might be from a 2007 study previously unreported above. The MW article didn't cite the specific source.

2. Research published by HBR in May 2018 addressed The Different Words We Use to Describe Male and Female Leaders found 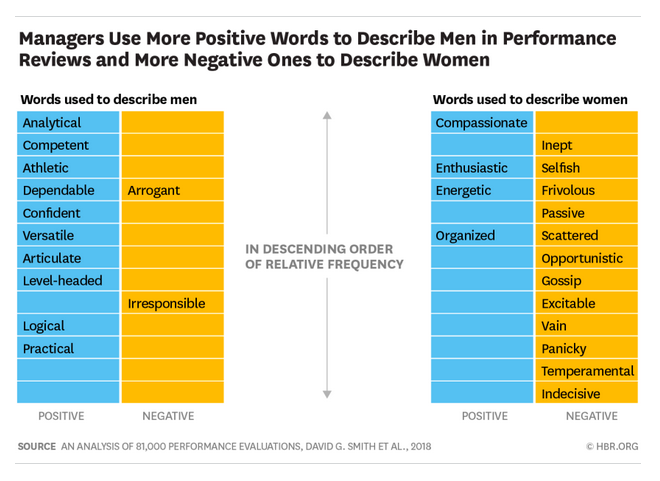 While the research all relates to Personal Greatness because it focuses on attributes, it shouldn't be surprising that attributes that are foundational to business, strategic and financial acumen - O - such as analytical and logical are more associated with men and those related to E -enagaging the greatness of others - such as compassionate, with women.

"...men are seen as having a relative advantage in being willing to take risks (O/P) and negotiating profitable deals (O)."

How much have things changed since 2000?

Not much - there's nary an O on any of the lists of women's perceived strengths. And until there is, women will continue to fill management positions in the middle and have trouble moving to the top of organizations.

This is why Leading Women's services enable learning and development professionals to audit their talent/performance management systems, diversity and inclusion professionals to introduce gender dynamics to managers and women to fill in The Missing 33%. To learn more about these services...

Did you find this blog post interesting? Read more on the subject here:
Let’s Stop Talking About “Female” Leadership Traits